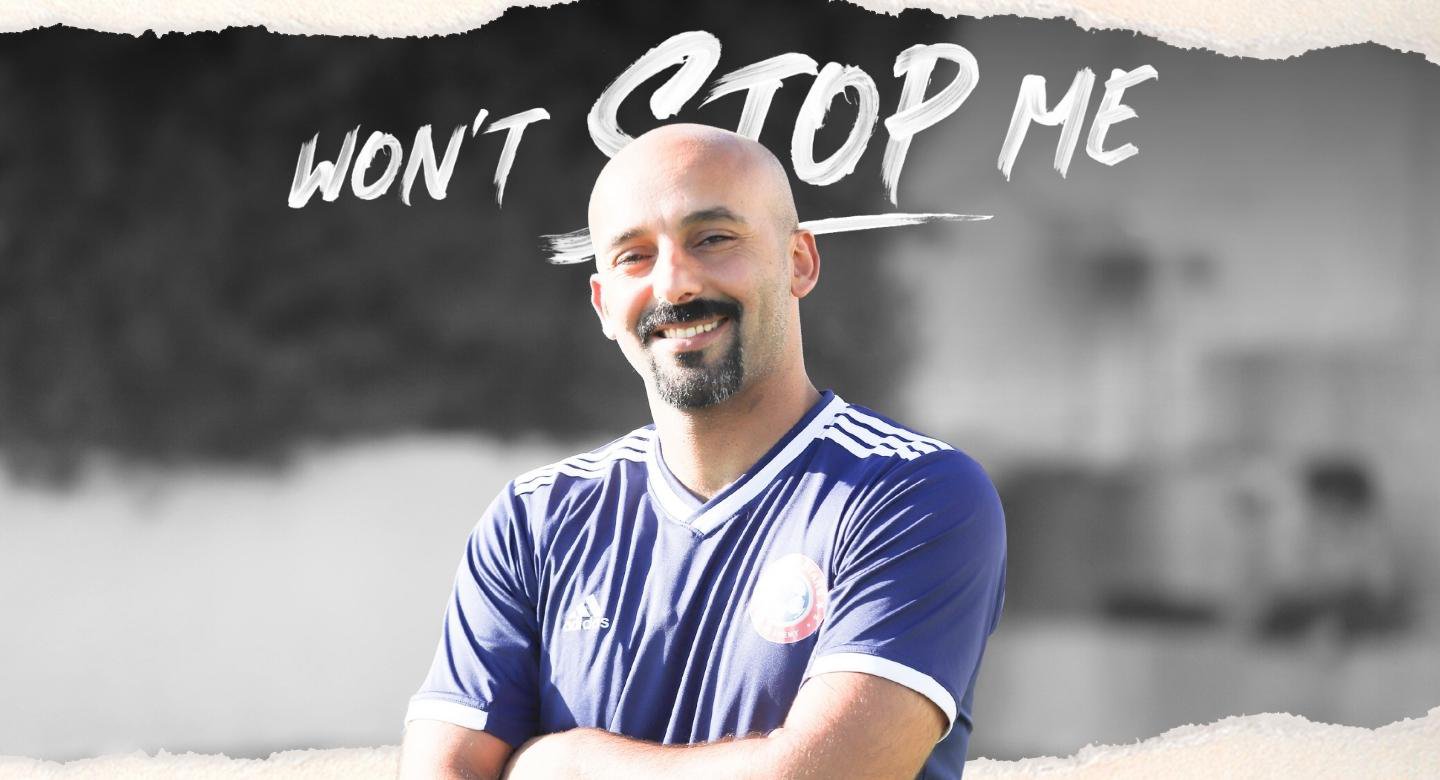 It’s the first physical education (PE) class of the year for a group of primary school boys in Ramallah, in the West Bank. They’ve lined up in the gym in front of their new teacher, Haitham. But rather than explaining the soccer drills that have been planned, he talks with them about sportsmanship, the importance of having fun and including everyone, and of believing in themselves.

The students, many of whom are feeling shy, slowly warm up and start nodding along, volunteering their own ideas about what each topic means to them. Haitham is helping them understand that the real lessons they’ll learn in PE aren’t just how to pass or shoot a soccer ball, but how to value themselves and others.

“We have many children who lack self-confidence, especially those who do not excel in the primary subjects in the school,” says Haitham. “My aim is to prioritize the needs of my students and to show them their uniqueness and their strengths through sports.”

“My aim is to prioritize the needs of my students and to work on showing them their uniqueness and their strengths through sports.” – Haitham, Physical Education Teacher and Coach

Starting the Journey to Empowering Play

Haitham is a busy man. He works as a PE teacher at an all-boys primary school and as a coach at the local co-ed football academy, and he also runs after-school programs for children in the neighbourhood. He’s been using Right To Play techniques to inspire and support children in all three since 2004.

Haitham became involved with Right To Play shortly after he moved to the West Bank. He had just graduated from university in Jordan, where he grew up, and had taken a job to teach physical education at a United Nations Relief and Works Agency (UNRWA) school.

Haitham used to teach kids how to win at sports, but now he uses sport to unlock their ability to learn and grow into healthy, confident adults.

“Before I was hired, there was not a specialized PE teacher at the school. The math or science teacher would run the PE class, which allowed them to compensate for lost time in their classes during what was supposed to be PE, burdening children with more work, and leaving them without any way of relieving their stress or learning a new skill,” he says.

Haitham, too, has been on a long journey. When he first went to a training session hosted by Right To Play in 2004, he was looking for ways to improve the quality of physical education the boys at his school were getting. While he wanted to know how he could develop their hard skills, what he was introduced to was the idea that sports and play could help empower students.

Haitham was open to trying new approaches, but he wasn’t convinced play was the right way. He questioned the practicality of focusing on the act of play instead of on hard results, like winning sports matches. It was when the trainers explained that they were trying to shift the goal of teaching from being about telling kids what to think or do, to teaching them how to think and make choices for themselves that things began to click for Haitham.

From Winning Matches to Changing Futures

The training inspired a new vision of teaching and coaching for Haitham, raising sports and physical education up from just being about victory to being a way of making a bigger change in the lives of his students.

“My goal before I started training with Right To Play was to train my students on winning and being competitive. I was a sore loser and I passed that on to my students,” he remembers.

“I saw a lot of potential in my students, and I made sure to provide them with the right training to reach the places they wanted to be.” – Haitham

“My students had a football match against another school. We were winning, then the judge wrongfully called a foul against my students, so I objected and withdrew from the match. But during the training sessions, I began to realize that sports are not about winning or losing; it’s about teaching children life skills. I realized I should be teaching my students to do their best, to focus on the team spirit and to respect the match regardless of the result."

Haitham started approaching physical education from a perspective that focused on sportsmanship, inclusion, self-confidence, and the development of each individual child’s abilities and interests, rather than just producing the most wins in matches. “I learned that a lot could be achieved with the power of play,” he says.

“I took the lead on initiating after-school activities because I felt that the PE class we had was not enough. I saw a lot of potential in my students, and I made sure to provide them with the right training to reach the places they wanted to be,” he explains. 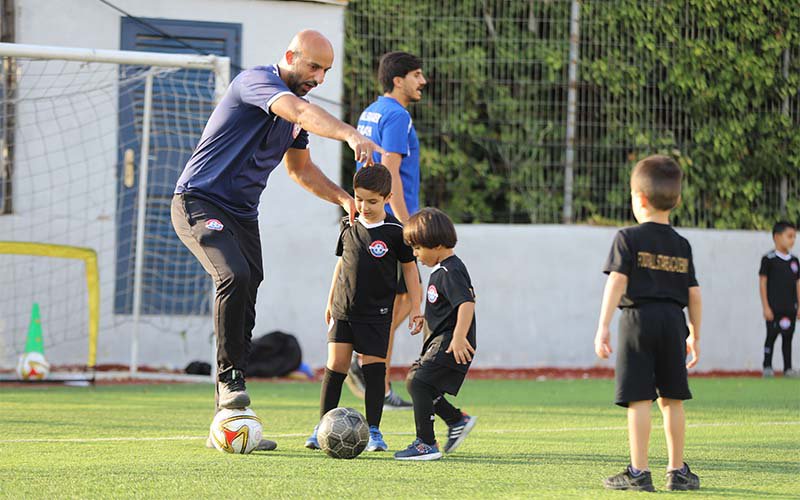 Haitham’s coaching helps children develop their abilities to reflect and to communicate with one another.

Sharing the Power of Play with Girls

Haitham has attended Right To Play training each year for the past 17 years, most recently through Right To Play’s TOGETHER project. TOGETHER is focused on creating safe, gender-responsive environments in schools and at home where girls and boys can develop to their full potential without discrimination or violence interfering. The training showed Haitham how to support girls and boys through the different challenges they face in school as they grow.

Physical education is a low priority in girls’ education in many schools in the West Bank. It’s treated as a subject that boys take, not girls. Girls are encouraged to either keep on studying or take a break instead of getting involved with sports and physical activity. As the father of three daughters, he finds this ridiculous.

To challenge the notion, Haitham started inviting a few of the local girls’ sports teams to play with the boys in invitation matches. At first there were difficulties because the boys would make fun of the girls, but Haitham coached the boys to reflect on what they were saying and doing, and before long they were cheering on the girls’ teams.

“Training with Right To Play from 2004 until now has a great added value to who I am as a teacher, a father, and as a football coach.” – Haitham

Haitham feels that the knowledge he’s gained through the years has helped in many areas of his life, both professionally and in his relationships with his own children.

“Each training I took with Right To Play over the past years was different, I always came out with something new that I knew I could apply in my school, in the academy, or even in my household,” he says.

“I teach my daughters using play to make learning fun, and encourage them to play sports that are stereotypically assigned to boys. I believe that they can do whatever they put their minds to.”

Stay connected to children in the Palestinian Territories

The TOGETHER Project is funded by the Government of Canada through Global Affairs Canada. The project aims to remove barriers to education for refugee children, especially girls, and to build teacher capacity to create safe, supportive learning environments for children. Through play, children develop important life skills that support conflict resolution, social cohesion, and psychosocial wellbeing in their daily life and in school settings.