Believing In Themselves: Bertha and Bilkis’ Stories 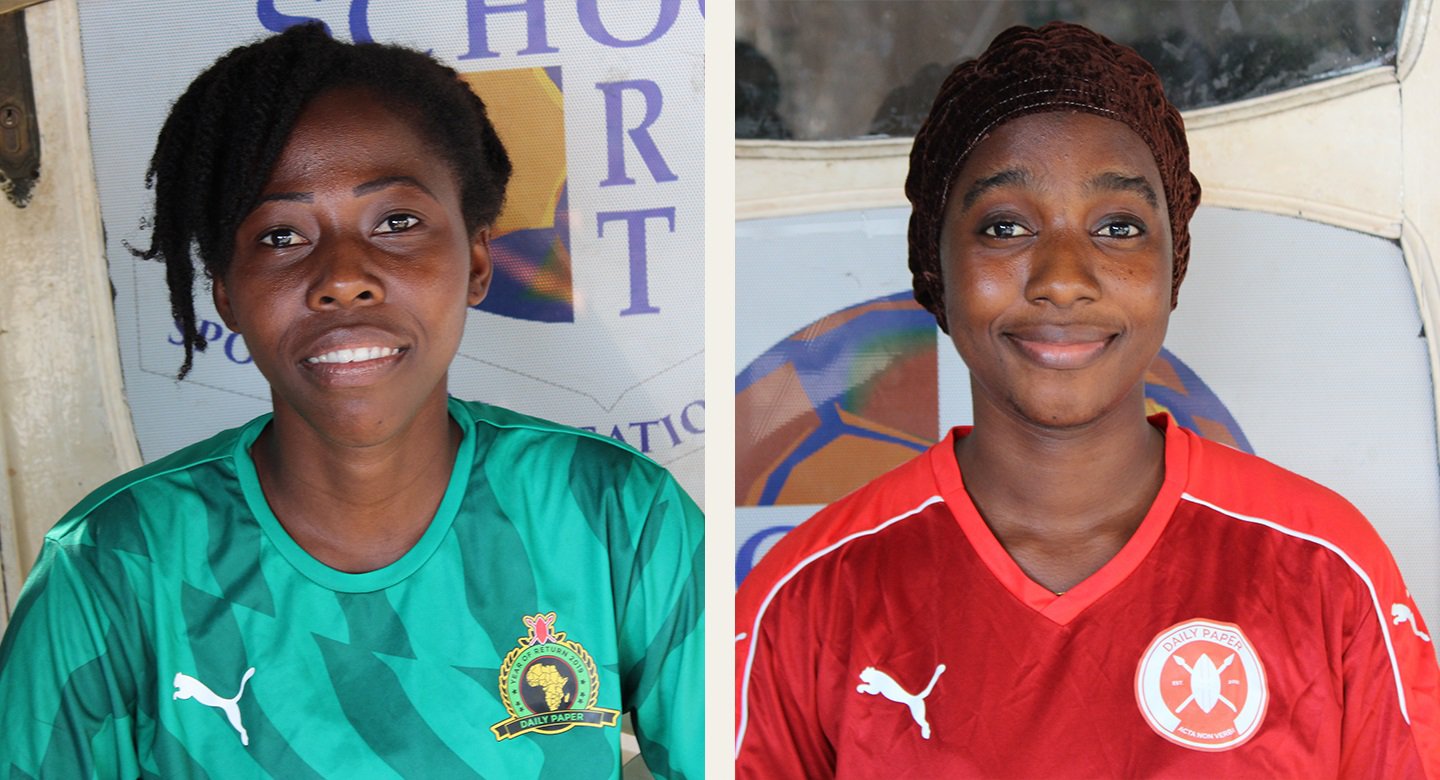 Bertha and Bilkis pass a football back and forth on a field in Accra. Their voices are loud and clear, their calls decisive as they coordinate with one another through drills that have honed their skills and made them star players on a local team. Even now, years after they first started playing sports, they keep up these training exercises with one another, practicing the communication skills that make their team one of the best in town. It’s a big change from seven years ago, when they both first stepped onto a newly renovated football field as part of a new program that would use sports to boost girls’ self-confidence.

It’s hard to be a girl in Ghana. Girls face stigmas and challenges that boys do not, especially when it comes to standing up for themselves, pursuing their interests, and excelling in careers outside the home. But Bertha and Bilkis, two powerful young women, are now able to help girls how to overcome those challenges, and it’s thanks to confidence in themselves that they learned from Right To Play.

Defying the Tyranny of Low Expectations

Bertha and Bilkis are 24 years old, and star members of The Nimobi Ladies’ Football Club in Accra, Ghana’s capital. They’re inspirations and mentors to a younger generation of girls in Accra facing the same challenges that they once did.

They met at 18, when they joined a Sports for Development program run by Right To Play. Both come from a very traditional community in Accra that places a strong emphasis on traditional gender roles, encourages girls to be quiet and submissive, and discourages girls from participating in activities that are deemed “unladylike”. Girls are subject to stereotypes that hold their abilities are less than those of boys, and that instead pursuing their passions and interests, they should only do what others want them to. While sports are no exception to this rule, they can serve as a unique arena to challenge these beliefs, allowing girls to show their abilities and excellence in ways that puncture the stereotypes.

Playing football with other young women taught Bertha and Bilkis how to believe in their own capabilities, how to speak up for themselves, and that they could be leaders. These are skills that both young women continue to draw on even now that they have graduated from the Right To Play program. 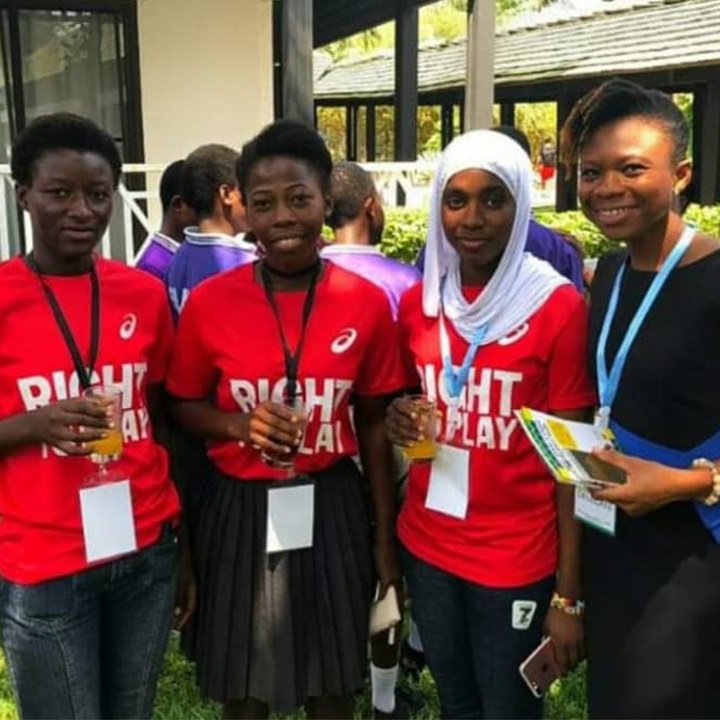 “I want to motivate and encourage more people to follow their passion.” – Bertha, Right To Play alumna

Growing up in a traditional home, Bertha was not used to speaking up to voice her needs and desires. “I was a bit shy and very timid. I could hardly talk to a crowd of two or more,” she remembers.

“The first [sports] workshop I attended was organized by Right To Play. I got the opportunity to meet two great persons in Ghana, football coaches Mercy Tagoe and Ibrahim Tanko. They were amazing. They shared their experiences with us and gave us advice, some of which has sustained me till now,” Bertha says. They encouraged Bertha to believe in herself, trust her own judgment, and to stand up for what she believed.

She credits these workshops and meeting with role models like Tagoe with helping her become more decisive, self-confident, and outspoken, skills she now uses not just on her football team, but also in her new job as an assistant teacher at a private school. Bertha runs her students through the same games, drills, and confidence-building exercises that once helped her, bringing them together after each activity to discuss and reflect on what they learned from it.

“I have adopted some of the play-based activities of Right to Play that I use during lessons with my children at school and they enjoy them a lot. It makes teaching easier and more interesting. I want my pupils to be confident and courageous,” she says. 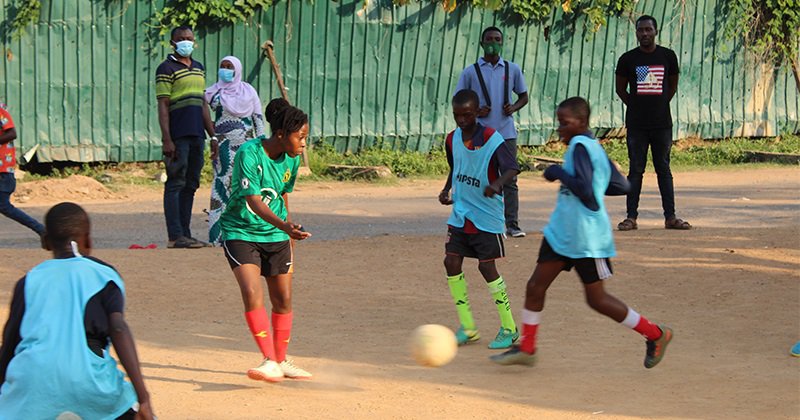 “Today I can stand tall and feel proud of the person I have become,” – Bilkis, Right To Play alumna

Bilkis faced similar challenges in her early life. She saw herself as introverted and as someone who had difficulty connecting with others. “It affected my confidence,” she admits. Without strong connections to others, she had trouble asserting herself, and people ran roughshod over her feelings.

Going through the Right To Play program and workshops pushed her to learn how to forge meaningful and deep connections with her teammates. She brought the knowledge off the field, into the rest of her life, where it helped her stand up for herself.

“I am now able to relate well with other people, I am confident and can speak up in the event someone tries to talk down on me.”

Bilkis took those skills and pursued a degree in Business Administration from the University of Professional Studies. Since she graduated, she’s been looking for opportunities to start her own organization to build more sports infrastructure for girls and get them involved in sports. In the meantime, she continues to advocate for girls in her community, speaking out against child marriage, against girls dropping out of school, and for parents to respect girls’ hopes for their own futures. Bilkis says she’s grateful for her experiences with Right To Play and wants young girls in her community to have the same kinds of opportunities that she had to develop her potential.

Because of their personal growth, their work with girls, and their advocacy on behalf of women’s rights, both Bertha and Bilkis were selected to be part of a delegation to the 2018 African Union Girls Summit that was held in Accra. They met the First Lady of Ghana, Rebecca Akufo-Addo, and delivered presentations on the importance of improved rights for girls in Ghana. Since then, they’ve continued to stand up for the rights of girls and women in Ghana.

Want to know more about young women like Bertha and Bilkis challenging gender inequality? Sign up for our newsletter.

Rising Up in Mali and Tanzania - Blog 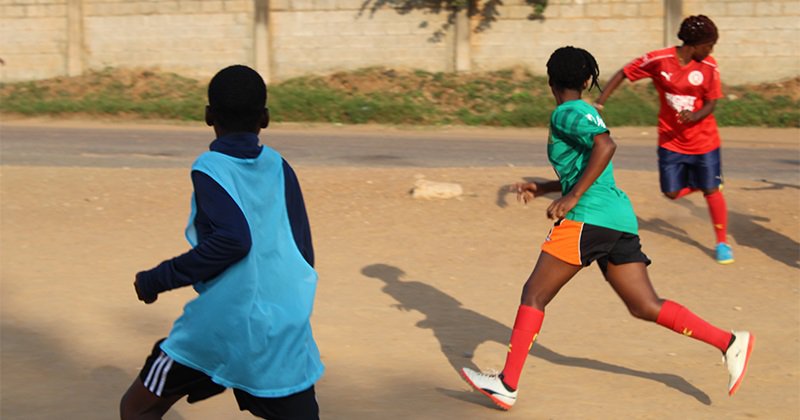 Kicking Footballs Turns Into So Much More

The Right To Play program that Bertha and Bilkis went through was a holistic Sports for Development program that uses participation in sports to provoke broader social and personal changes. Bringing girls together to play provides opportunities for other activities that cultivate their collective power and help them defy stereotypes and discrimination.

The program Bertha and Bilkis participated in included structured discussions around confronting traditional gender norms, confidence-building team activities where girls could practice leading one another in safe and supportive situations, and lessons in financial literacy to boost their independence and self-sufficiency later in life.

Along with these activities, girls were brought into contact with professional athletes, both male and female, who provided positive role models and encouraged their development. These include international stars like Jerome Boateng, Kwesi Sarpong, and Akwasi Frimpong, as well as local stars like Mercy Tagoe, one of the pioneers in Ghanaian women’s football. Both girls credit the inspiration that talking with professional athletes who took their abilities and aspirations seriously played in building their confidence.

The final component of the program was connecting the girls with other girls and women who were advocating for gender equality. This included opportunities participating in the 2018 African Union Summit, and ongoing work with the Nimobi Ladies’ Football Club, along with other initiatives and programs that empower them to make decisions for their own lives.

There is still much work to be done in Ghana, and worldwide, to reduce gender inequality. But thanks to leaders and mentors like Bertha and Bilkis, girls growing up in Ghana today are finding the strength to challenge harmful stereotypes and traditions that hold girls back and create a brighter future where their potential and abilities are recognized and respected.